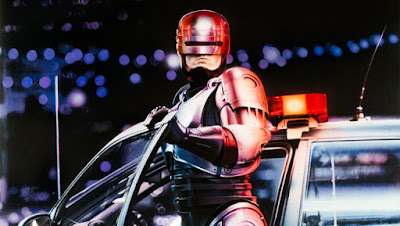 I’ve bitten off more than I can chew. Trying to understand and summarize topics like physics or Artificial Intelligence has been harder than I thought. I’m currently about 3 months behind in my learning/writing posts about certain topics. I’ve decided to try to just hit the highlights, write these posts and move on with my life.
January was Buddhism. February Physics. March is Artificial Intelligence. While I did a decent amount of research, these two articles really gives the best overview on the future of AI so if you want to read something from someone who knows things, read this: 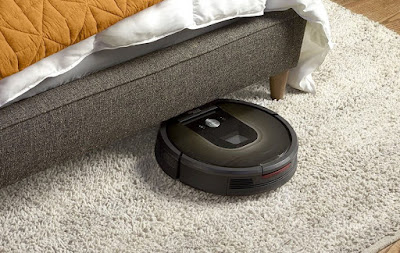 There are a lot of different AI terms, theories and predictions. From reading different articles and watching various videos, I’ve come to a few conclusions:
1-      AI is here. It is in our homes, cars and workplaces. We tend to think of AI as what is coming instead of what we have already integrated into our lives.
2-    Timelines vary greatly about when or if AI will ever surpass humans’ ability to think, learn and plot.
3-    Essentially every technology humankind has ever made has been weaponized.
4-    Being the first country or company to be first in this race could possibly mean world domination.
5-    Machines should be seen as a tool to work together to make greater progress than we could on our own. Machines aren’t inherently good or bad. They operate how we tell them to operate; at least for now.

As usual, I have compiled some AI terms we should all be familiar with.

The simulation of human intelligence by machines. Or more simply, having machines “think like a human.”

Big Data
There’s data, and then there’s big data: a collection of data sets so large and complex that it becomes difficult to process using most typical data management tools. But big data is the raw fuel of AI, as it provides the inputs for surfacing patterns and making predictions.
Ex: More and more of IT’s technology investments will go towards managing big data.
Data Mining
The process of combing through large sets of data to discover patterns and extract useful information
Machine Learning
A core sub genre of AI by which computer programs can “learn” and automatically modify its knowledge, procedures, and processes to improve performance and efficiency. As the machine learns from past performance data, it can also begin to predict and improve future performance.
Ex: Netflix’s machine learning programming looks at what I watch, and gives me personalized recommendations of other shows I might enjoy.
Deep Learning
A ‘deeper’ subset of machine learning that uses complex algorithms to mimic the brain’s neural network to learn, with little or no human supervision.
Chatbot
A computer program that simulates human conversation or chat.
Microsoft created a bot named Tay and Twitter taught it to be racist.
https://techcrunch.com/2016/03/24/microsoft-silences-its-new-a-i-bot-tay-after-twitter-users-teach-it-racism/

Algorithms:
Rules that teach computers how to figure things out on their own.

Unsupervised learning
In many ways the spookiest part of AI research is realizing that the machines are really capable of learning, and they’re using layers upon layers of data and processing capability to do so. With unsupervised learning we don’t give the AI an answer. Rather than finding patterns that are predefined like, “why people choose one brand over another,” we simply feed a machine a bunch of data so that it can find whatever patterns it is able to.
Turing test
While the test was originally conceived as a way of determining if a human could be fooled by a conversation, in text display only, between a human and an artificial intelligence, it has since become short hand for any AI that can fool a person into believing they’re seeing or interacting with a real person.
Source:
https://thenextweb.com/artificial-intelligence/2017/09/10/glossary-basic-artificial-intelligence-terms-concepts/

“Why do we want to set ourselves up as the enemy when they might overpower us someday?” he said. “It should be a joint partnership. All we can do is seed them with a strong culture where they see humans as their friends.” Elon Musk

AI in your everyday life:

“The development of full artificial intelligence could spell the end of the human race….It would take off on its own, and re-design itself at an ever increasing rate. Humans, who are limited by slow biological evolution, couldn’t compete, and would be superseded.” – Stephen Hawking
AI is being used to help people invest because it can a better job than humans at investing and monitoring the market by taking emotions out of the equation. Sites such as Wealthsimple or Weathfront use algorithm instead of humans which saves people money.

Driverless cars, drones, robotics, Smart Reply with your email through Gmail, turnitin.com to detect plagiarism, smarter traffic lights, and banks using AI to review credit applications are all functions of AI.  I also read that ‘The New York Times reports that the average flight of a Boeing plane involves only seven minutes of human-steered flight, which is typically reserved only for takeoff and landing.’ Isn’t that wild?

“By far, the greatest danger of Artificial Intelligence is that people conclude too early that they understand it.” —Eliezer Yudkowsky The idea is that we’d build a computer whose two major skills would be doing research on AI and coding changes into itself—allowing it to not only learn but to improve its own architecture. We’d teach computers to be computer scientists so they could bootstrap their own development. And that would be their main job—figuring out how to make themselves smarter. Tim Urban

Voice profiling is also a part of AI I had never heard of. AI can detect through your voice your height, age, weight, social status, facial features and ethnicity all through your voice. Your voice is like your fingerprint or DNA.

Sam Harris has a TedTalk where he discusses AI. One of his points is that ‘We don’t hate ants. Presence conflicts with ours, we kill them.’ Which means in the future, we could be the ants.

“The real question is, when will we draft an artificial intelligence bill of rights? What will that consist of? And who will get to decide that?” —Gray Scott

Boston Dynamic is a robotics design company making things like this: 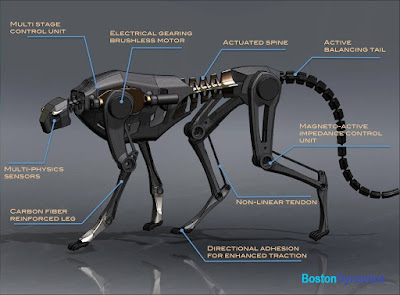 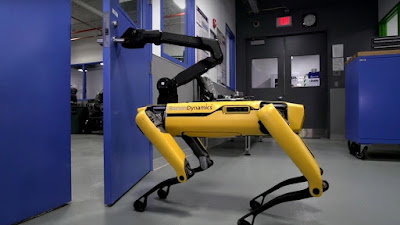 They also created an advanced robot named Atlas which I’m upset about but don’t really want to get into the specifics of why at this precise moment. 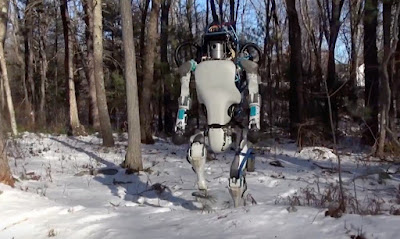 Also, I came across a site where I learned that there is a Doomsday clock since 147 by members of the Bullentin of the Atomic Scientists’ Science and Security Board monitor how close the wold is to essentially destroying ourselves. Midnight means death. We have never been so close to midnight in the clock’s existence. 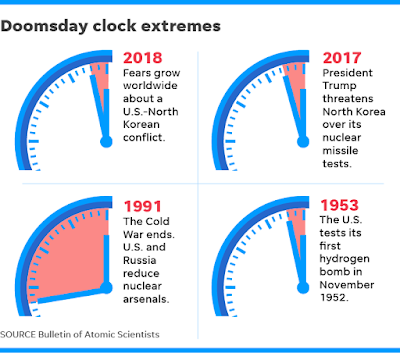 I watched a documentary about AlphaGo. Go is more than 3,000 years old that could have possibly originated in China. Go has exponentially more combinations than chess and is a strategy game to control more of the board than your opponent. 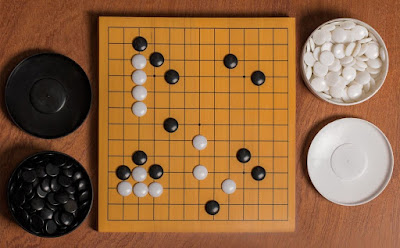 AlphaGo was created by DeepMind which is owned by Google. It basically taught itself how to beat the world’s beat GO player which some people prognosticated might never be possible. It essentially played itself millions of times and learned the best strategies that perplexed expert GO players but in the end, taught humans how to play a more advanced version of the game. In the documentary, it says that ‘GO made his humanness expand and made him a better player.’ It explained that machines will gain our confidence because they make better guesses and a good human plus a machine is the best combination. 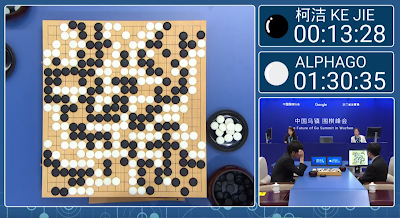 Let’s talk timelines. Summarizing Tim Urban's article, the average best guess from studies and scientist is that Artificial Super Intelligence (computers that are trillions of times smarter than us in every way) is 2060. So in about 40 years, the world would be on the precipice of unimaginable change.

How advanced we are in comparison of an ant, chicken and apes. 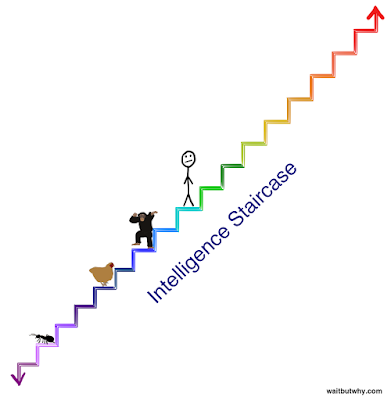 How advance Advanced Super Intelligence would he compared to us. 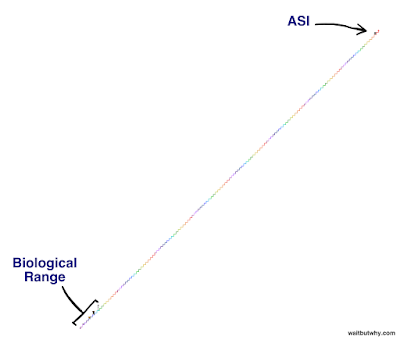 This is frightening. It is hard to imagine this but if computers are getting more powerful and teaching themselves, I feel like anything is possible in the next 50-100 years.

A super intelligence could give us indefinite lifespan, either by stopping and reversing the aging process through the use of nanomedicine, or by offering us the option to upload ourselves. Tim Urban

(I have posted below my favourite part of the Tim Urban article. It is a little long but it puts things into perspective about where we are at now.)

To conclude, I have no idea what is going to happen. Amazon has drones delivering packages, robots will be teaching kids, life may or may not be a simulation and we could possibly live on Mars one day so my suggestion is to buckle in for a wild ride, be kind to other people, save your pennies and try not to step on the ants. 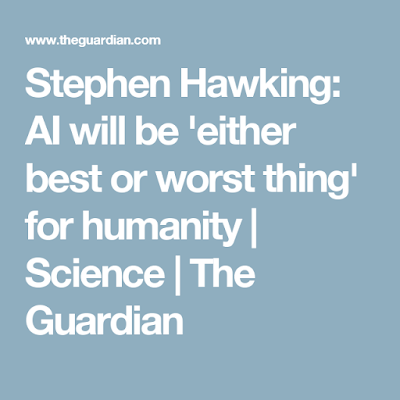 “I’m increasingly inclined to think that there should be some regulatory oversight, maybe at the national and international level, just to make sure that we don’t do something very foolish. I mean with artificial intelligence we’re summoning the demon.”

Posted by Bert Brandon at 7:34 AM No comments:

Bert Brandon
Just moved to Shanghai to teach high school English. Nice to be back in Asia and excited about what life in China might bring.